Experience the Wanamaker Organ !!!
I have many beautiful memories of watching the gifted Grand Court Organist Keith Chapman playing the incomparable
Wanamaker Organ!

The sound of this huge instrument fills the entire Grand Court  which
is 14 stories high!! I  have been to that store many times!  BTW, my
maternal grandmother worked there as a payroll clerk a long time ago.
My family made annual trips to the Wanamaker Store for the Christmas program,
at which time there was  a huge screen covering the pipe case, upon which there were
wired many thousands of computer driven light displays, which "kept time"
with the Christmas music program.   Since the new store business Macy's has now occupied
these premises,  We know now that this tradition has being maintained.

Usually, I visited the store on my own, and walked up to the second floor, so I could sit in the
Console guest platform!  It surely provided a spectacular view of the Grand Court!
There was a tremendous sound emanating and projecting from most of those  28,743 pipes
in 462 ranks, especially when there was a full registration Crescendo!

This organ sustained some damage due to moisture during building reconstruction activities.
The echo division had to be repaired by another company in New England, and the console,
all 2-1/2 tons of it, had to undergo repair and refurbishment of the stop jambs. The organ still
was effectively playable due to the establishment of a remote registration "patch" console.
It was quite a sight to see the main console being played without stop jambs on both right and left sides!

The console was reassembled, and a summer dedication concert was conducted there to celebrate the "rebuild".

I enjoy visiting the Grand Court again and again to hear the more and more restored (with each visit,
there is noticeable improvement!!) Wanamaker Organ play its splendorous harmonies!

Since the fall of 2007,  work to relocate and re-install the Orchestral Division into its new chamber on the
4th floor (Juniper Street side) is in progress, and is largely completed.  The last of the pipes left to install
are the reed ranks.  Spring and Summer 2008 were spent refurbishing the Orchestral Division
components (the pipes and their Pitman actions, wind chests, magnet wiring, etc.).
All of the Orchestral Division was completed in 2012.  When this occurred, the Wanamaker Organ became 100% playable,
all 462 ranks of 28,743 pipes!!  WOW!

A lot of information will reach you each quarter from the Friends Of The Wanamaker Organ,
in the form of the quarterly Stentor when you join that society dedicated to the preservation and continuous use of that magnificent instrument!
The cost is very low when you consider that the 4 booklets you get every year are packed with 16 pages of details and history on this organ,
its concerts, and its maintenance status! The organ is presently played by current and talented Grand Court Organist Peter Conte.

After 82 years, the Philadelphia Orchestra AND the Wanamaker Organ played together again!!
The date: Sept 27, 2008.
This was a live concert I attended, the "Concert of the Century" as far as I am concerned :)
The CD of the live recording is AVAILABLE!!

The Wanamaker Organ has surpassed one CENTURY of operation!
Macy's and The Friends of the Wanamaker Organ teamed up to produce several Centenary events in 2011.
On the actual Centennial Day of June 22, 2011, a special commorative plaque was presented by the Mayor
of Philadelphia.  Several concerts took place from June 22 through June 26.  The previous event was a big success;
the Wanamaker Organ played the accompaniment part for a restored silent film called "Metropolis" in March 2011.

We should expect a recording release for these events!

Next concert was October 1, 2011, the third in a series of three Centenary events. It featured
a combined organ - orchestra format, this time the orchestra will be "Symphony in C" from NJ, and
it was directed by Rossen Milanov, who also served as associate conductor for the Philadelphia
Orchestra - and directed the "Jongen symphony" concert of Sept 27, 2008.

Next concert was the Virgil Fox concert on Oct 27, 2012.  It was very successful with the Orchestral
Division completed! They debutted the new 80 inch gong in a Wagner selection with a great deep
sound at a crescendo point in the loudest section near the end of the piece.

The best music on You Tube for this instrument is the Bach piece "Come, Sweet Death", as
transcribed by Virgil Fox.  You MUST HEAR this, it is truly sublime!!

Keep an eye on the "FOWO" website for all recordings, INCLUDING ANNOUNCEMENTS OF NEW RELEASES!

Here are some pictures I took of the Wanamaker Organ 6 manual console with Keith Chapman present: 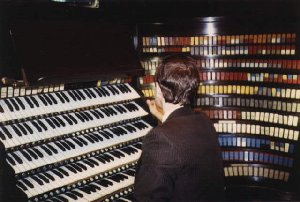 PLEASE VISIT the Wanamaker Organ the very FIRST Chance you get;
I guarantee it to be one of the (if not THE) GREATEST musical experiences in your life!!

The "upgraded" acoustic (without the curtain) sounds of the Wanamaker were recorded with DTS
and HDCD format on CD "Magic"; performed at night by Peter Richard Conte; released Nov 2001.
Three divisions at that time remained to be restored:
Swell (71 ranks, 4422 pipes);
Choir (24 ranks, 1452 pipes); and the
Orchestral (39 ranks, 2811 pipes).

These awaited restoration and were been silent since 1990's; thus, these were not playing during the
recording of "Magic".  So; of the 28, 543 pipes installed, 8685 pipes were not operational.
Despite that gigantic amount missing (like the average whole cathedral organ), the resources
available made a very beautiful listening experience, especially with the string, great, ethereal, echo,
and pedal divisions working as a "team", under the brilliant playing (and transcriptional talents)
of the current Wanamaker Organist, Peter Richard Conte.

This contains works by composers who played the Wanamaker Organ, (Louis Vierne, and
Marcel Dupre).  It also includes works by a composer who played the original antecedent version
organ (The original Murray Harris St Louis Exposition "World's Fair organ, 5 manuals, 10,000 pipes,
which were transferred-console, {windchests / blowers, too}; -and pipes - in 13 freight cars - to the
Philadelphia Pa store, and dedicated as operational in 1911); played then by  Felix-Alexandre Guilmant.
Another important work included in this CD was the Bach Chorale (BWV478) "Komm, Susser Tod"
("Come, Sweet Death") piece.  This work originally was transcribed for the Philadelphia Orchestra by
Leopold Stokowski, which work inspired Virgil Fox to transcribed the composition in order to take
advantage of the Wanamaker Organ's tremendous String Division (88 ranks, 6340 pipes!).
It was played by Mr. Fox at the AGO Convention in 1939.  When "Legacy" was recorded at night,
by Peter Richard Conte, two Divisions had been previously brought back to full operational status:
The Choir and Swell Divisions.

Midnight at the Grand Court:
This recording was also done at night with all store activity silent, including elevator bells quieted,
and the custodial services absent!

Special picture of Wanamaker Console refinished!     Another view of the console with Grand_Court_Organist playing it in concert.

An Interesting Quote From John Wanamaker (Store Founder and Original owner of the installation):

" I learned thirty years ago that it is foolish to scold. I have enough trouble
overcoming my own limitations without fretting over the fact that
God has not seen fit to distribute evenly the gift of intelligence. "

- John Wanamaker "The King Of Merchants"

Other links of note:

A Society on The Greatest Virtuoso to play the Wanamaker Organ:

Back to Pipe Organ Links